Running 5e as OSR: Monsters by HD not CR

Some of my friends love 5e, only play 5e, only will play 5e. I find 5e unwieldy and time consuming to prep and run, whereas I love the flow of OSR and PBTA games. But 5e has been around for nearly a decade and apparently isn't going away soon either.

What I want to know is whether I can run 5e for them, RAW or RAW-ish, in a way that means I a) don't have to bog myself down in encounter building and all that crap and b) can use all the cool OSR stuff I have lying around.

Encounter building is painful; it sucks all the joy out of running a game for me. However, embracing "Combat as War, not Sport" I'm sacking off encounter building for good so I don't need CR. What I could do with, however, is an idea of general stats against Hit Dice in 5e so I can use OSR resources or eyeball stats in play.

Thankfully I found this interesting analysis on BlogOfHolding about generic stats for given CRs and the rules are surprisingly linear. It seems the rule for average HP is mostly 15 * (CR+1) or 15 * CR which would suggest that monsters have a d30 as a Hit Die, but assuming they average out around d8s or d10s maybe that's steps of 3HD per CR? Maybe, accounting for an average CON mod of say +2, it's more like 2HD per CR?

Cross referencing against Sly Flourish's analysis of monster CRs per PC at different levels here and the Unearthed Arcana encounter building document (that I think made it into Xanathar's?) suggests that steps of 2 is probably about right. I don't care too much, I'm eyeballing.

With a little work I can turn this around to get the data I wanted. I find it easier to think of Damage in terms of "dice" - no modifier needed, 'cos it's quicker - on the fly: 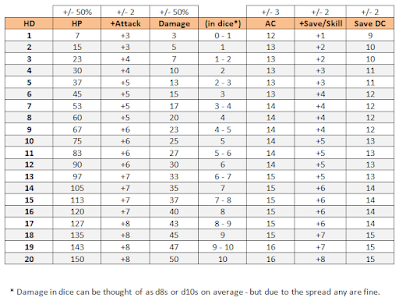 I'm surprised how well this turned out given how complicated and opaque the sections in the 5e book are. Comments welcome below.

I am no fan of massive statblocks and fiddly special rules, so I'm happy to put this table in my bag and use it as a Monster Manual. Monsters don't need to be built with PC rules. I can derive rough stats from the HD and give things abilities or behaviours that fit what they are in play.

Also: let's take an OSR monster from a (great) book:

In 5e the Lantern Bearer above can become:

Radiant Burst as written (1 "die" equivalent over multiple targets + non-damage effect is fine) and Save DC would be 10.

Other rules as written.

And that's fine with me. It doesn't really matter as long as I have a rough frame to use.

Running 5e as OSR: Monsters by HD not CR

Other sites Of Note