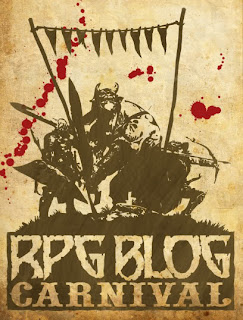 Festivals can add colour and a change of scene and pace to our games, so grab a set of polyhedrals (or roll one at the bottom of the post) and let's see what's going on!

The d8 - this festival celebrates or ensures:

The d6 - festivalgoers are encouraged (or forbidden) to:


Big thanks to Of Dice And Dragons for running the carnival, and to Roll4 for hosting this month's festivities!
There are more of my RPG random generators here or follow @plaspoly on twitter for some random results. I would love to hear your feedback in the comments, and about the adventures you generated using these tables.
at May 14, 2019
Email ThisBlogThis!Share to TwitterShare to FacebookShare to Pinterest
Labels: adventure, festival, gm resources, mystery, one roll, random generator, rpg, rpg blog carnival, scenes, system agnostic

* Note: I don't like to host ads on this blog, as it's not a commercial thing, but I can earn store credit on digital RPGs on via the DriveThruRPG affiliate program. If you're in the UK please consider buying physical books, boardgames and wargames at my FLGS: Mighty Lancer Games which is family owned and run by a friend of mine. And buy indie and small press RPGs, and support the blogosphere.

Other sites Of Note